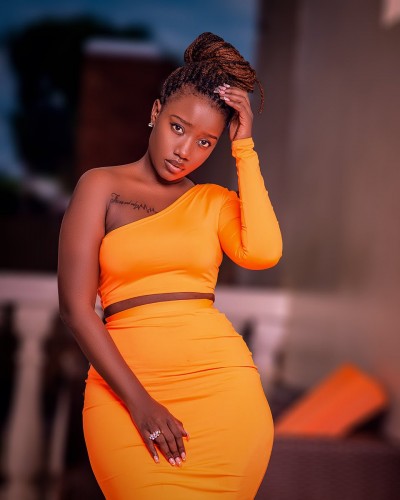 Lydia Jazmine is a Ugandan female recording artist who joined the music industry in 2014 and 2015-2016 was voted the breakthrough artist of the year in Ugandan music awards. The Songbird was first signed by producer Bushington but she is currently signed and managed by Ronnie Mulindwa formerly of Obsessions. Jazmine has....Full biography below

Lydia Jazmine is a Ugandan female recording artist who joined the music industry in 2014 and 2015-2016 was voted the breakthrough artist of the year in Ugandan music awards. The Songbird was first signed by producer Bushington but she is currently signed and managed by Ronnie Mulindwa formerly of Obsessions. Jazmine has not been a disappointment and is among the few female Ugandan recording artists that have rocked Uganda’s radio and TV stations with beautiful and sensational love melodies like Same Way. Education and Background Nabawanuka Lydia alias Lydia Jazmine was born on the 27th of July 1991 to the family of Kasugi William and Nakanwangi Scolastica in Mukono district 20 km to Uganda’s capital Kampala. In 1995 Lydia Jazmine parents divorced and she was forced to relocate to Jinja where she lived with her aunt until she was done with her primary school level. After her primary Lydia returned to Kampala in Kyebando Kisasilo zone a Kampala suburb where her mother was staying. Jasmine says growing up wasn’t an easy job because she had to be brought by a single mother who had other four children.Nabawanuka alias Lydia Jazmine started her education journey from Victoria Nile in Jinja district she then transferred to St Mary’s School Namaliga, in Kimenyende sub-county Mukono district. After her primary Jazmine joined City Land college Matugga for her O level before joining Margaret Secondary School where she finished her A level from. Jazmine joined Multitech business school where she pursued a bachelor’s degree in Business Administration and Management and she also certified as a peer educator. Music career The talented Songbird started singing in her high school when she joined the school choir. Later Lydia Jazmine joined Watoto church choir and Passover harvest centre. In her form, six vacations joined a band called Gentnum where she specialized in doing cover songs. During this time Jazmine did various tours with artists like Coco finger and Fidempa from Kenya. She also partnered with a guitarist Harry Lwanga to form an acoustic group and they started doing acoustic cover songs as a way of raising her tuition. According to Lydia Jazmine while performing to one of her acoustic gigs in 2013 she got a chance to meet Mowzey Radio and Weasel and producer Bushington who was their producer at the time. Bushington later contacted her and hired her as an official back up artist of the Ugandan duo Radio and Weasel. Her voice featured in songs like Breathe away which was produced by Michael’s fingers, Ntunga Ntunga which was produced by Nessim, Can’t let you go. Lydia Jazmine has also backed artists like Pallaso, Sheeba Kalungi, Bebe Cool and many more. In 2014 the beautiful Jazmine released her first single titled you know which was a duet with a Ugandan artist Rabadaba. This was her first single under Necta Music of Bushington who had just signed her under the management. In 2016 Lydia Jazmine teamed up with a talented vocal soldier Geosteady and recorded a song titled Same Way which was produced by Nessim and this was Lydia’s breakthrough hit song in the music industry.